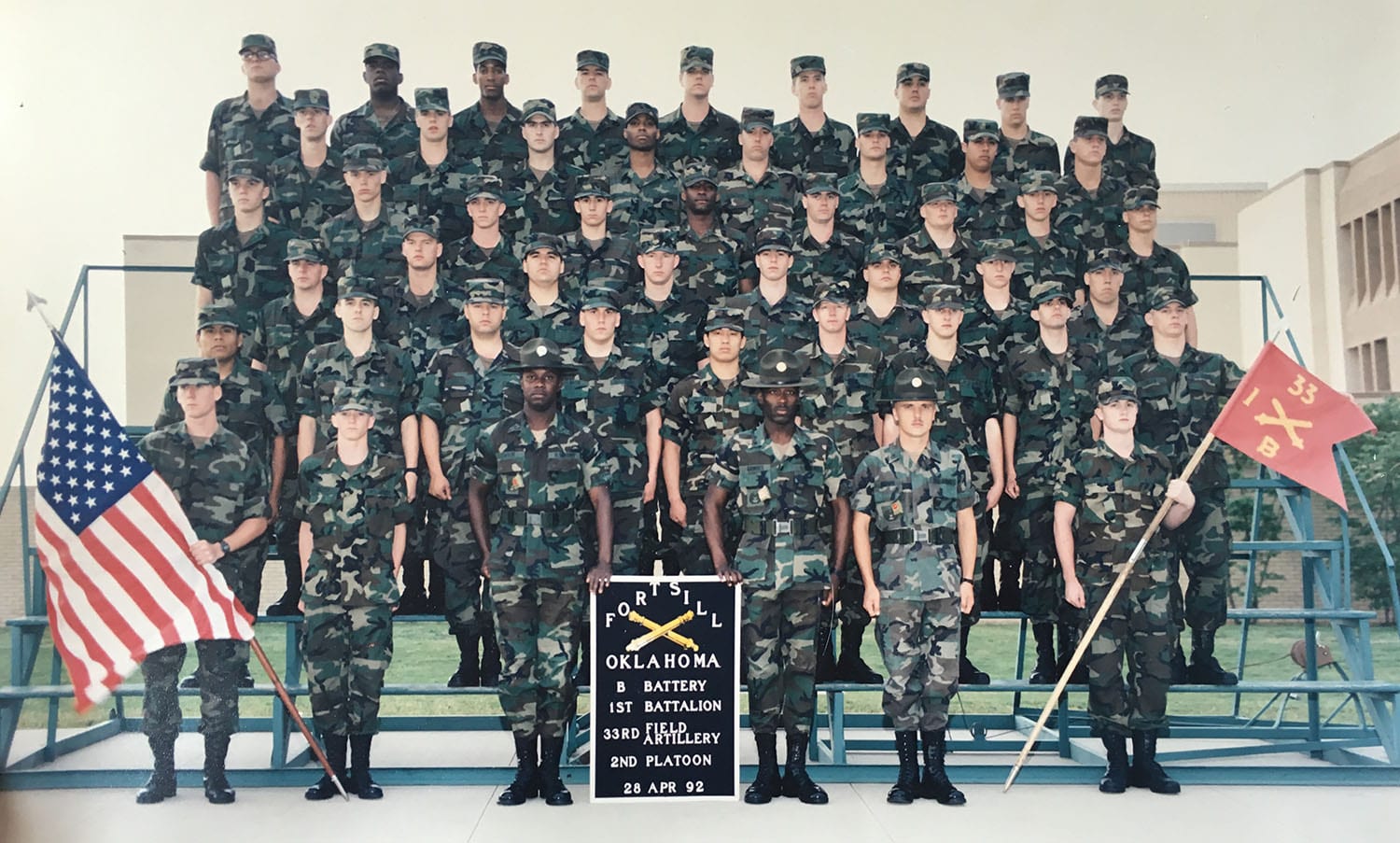 Don’t thank me for my service. I didn’t do anything to protect your “freedom”. But, if you’re interested, I’ll tell you what I did do.

I went to boot camp, put on a uniform, sang the songs, and fully immersed myself in an eighteen-month long education of the inner workings of the war machine. At least, from the perspective of an enlisted grunt. Yeah, as you might have guessed, I got out early. And as you might not have guessed, the conditions under which my education was terminated were deemed… “honorable” ;)

It was late in the year 1991, and I had just moved back from California. My friend Rich Dare and I were having a late-night talk while toking on the latest strain. We concluded that we didn’t really know what to do next so we both concluded that we’d join the military. Before ya knew it, we were in the recruiting office taking a test that would determine our selection of jobs. I was infatuated with Top Gun and very much wanted to fulfill the need for speed, so I was in the Navy office. Rich’s father was an Army helicopter pilot in the Vietnam war, so naturally, he gravitated to the episodes of M.A.S.H.

WHEN IGNORANCE REIGNS, LIFE IS LOST

Both of our test results came in with very high scores and we could choose just about any job we wanted. Just before I was about to sit my ass down in the cockpit of an F-14, Rich comes running in and says, “Dude, don’t sign anything before I talk to you.” In the hall, he tells me we could join the Army together in a “cohort” unit. Meaning we would go to basic training together and spend the first two years of our military careers together at the same permanent duty station of our choice. That permanent duty station happened to be on the beautiful island of Oahu, Hawaii. What was our job going to be? We didn’t give a shit, we were going to Hawaii!

As it turned out, our jobs would be titled 13 Bravo, artillery. Which means we would shoot really big guns. 198-millimeter howitzers with a 64″ recoil to be exact. I’m sure if I’m wrong someone will be very excited to correct me of course. Not many more things are as delectable to the human ego as that of correcting someone.

Bootcamp was to be in Fort Sill, Oklahoma. Followed up with 5 weeks of weapons training. Early on I regularly got into trouble as my innate disobedience got the best of me more often than not. But at some point, something inside of me switched. As though I was poisoned in my sleep, I felt patriotism well up inside of me and a strong sense of pride began to fill my veins. Maybe it was one of the mysterious injections I got in the cattle prodding line shortly after they shaved off my spiritual antenna, er, I mean.. my hair.

Well, I was hypnotized and star-spangled for all of about a 6-hour flight to the middle of the pacific. As soon as we made it to Schofield Barracks on Oahu, the mechanical parts of my patriotic disease began to rust and my sense of reason began to return, lubricating and healing my pride-infested cardiovascular system.

It wasn’t long before the scope of my vision widened and I saw what I had gotten myself into, a mindless and obedient cult of order and conduct. Row after rigid row, star-shaped pupils, perfectly encircled by irises of blue, with veins of red, pumping american pride through the whites of their eyes. The patriotic conditioning is highly effective and is well ingrained and deeply entrenched in the typical civilian as well, through controlled media, the death of relatives, our lack of personal responsibility, and the human brain’s psychological default process of conformity and “group-think”.

I was, in a short period of time, referred to as the barracks attorney, talking E6’s into hanging up their lifer caps and returning to the civilian world. I went to the library on the post and studied peacetime military law. While I was at the library, I made photocopies of documentation of shady acts of american military conspiracies. For example, Cold War hallucinogenic drug experiments on american soldiers, the assassination of JFK, internal espionage, and mind control experiments on american civilians unbeknownst to them. I took these articles, along with the enlisted laws, and wallpapered an entire wall in my room so the Colonel could read them as he walked through my room on inspection days. I removed the nameplate from my barracks door that read PFC Dieter and PFC Bartusch and replaced it with a black anarchy symbol on top of an upside-down american flag, that read, “When ignorance reigns, life is lost.” A lyric written by Zack de la Rocha of Rage Against The Machine. Which, in fact, was the music I would play at full volume for all of J-Quad to hear. I grew my hair as long as I could within regulation standards. I sprayed urethane on my boots so that they were some of the shiniest in the battalion. I knew my general orders and all of the necessary stats about the M-198. I knew everything I needed to know about standard military weaponry and was an expert shooter with all of them. As much as they wanted to, they couldn’t get me on anything. I was legal, loud, and I knew my shit.

So, instead of fighting me, they took me off the gun line and gave me the easiest job in the battery, BC driver. BC stands for battery commander. All I really had to do was drive a hummer and get the BC lunch. They didn’t want me influencing anyone else and they had no grounds to kick me out.

In case you didn’t know, drugs and alcohol are prolific in the military and have played a common role in my life experience. I smoked marijuana often and sold it to the guys who drug tested us on occasion. So, I never got busted for pissing hot.

One day they conducted a surprise inspection, K-9’s and all. I took my little tin of stems and seeds, lifted a ceiling tile out of the way, and chucked it down about 4 rooms from mine. After the inspection, they let everyone return except for Bart and me. I told the BC to let Bart go, that this had nothing to do with him. He did. He then held the tin up, sitting behind his desk, and asks me, “Is this yours?” I said, “No sir.” He was like, “Oh, come on damn it, you know it’s yours.” I continued to deny it. He then said, “You clearly do not want to be here, let me help you get home.” I asked him what his offer was. He said if I would piss hot that day and again in 2 weeks that he would give me only one article 15, one 45 day restriction, a general discharge under honorable conditions, and send me home on day 46. I said, “Deal, get me the fuck out of here, sir.” And to the latrine, I went.

I am grateful for the experience, the testing of my limits, the disciplines I came to understand and to know what it’s like on the inside. I’m extremely grateful for my time on the beautiful islands of Hawaii, Oahu, and Kauai. I’m grateful that I was able to assist with the cleanup and reclamation of Kauai after Hurricane Iniki.

My disdain for the flag and for the operations of our government has nothing at all to do with how I personally feel about the men and women who have died in the apparent name of defense, protection, and honor. It is the noblest of deeds to die and sacrifice your life for that of another, no doubt. I deeply appreciate, admire, and revere those who have done so. They are not the source of my angst and I mean them no disrespect. It is the war machine and the conduct of our government, the bias of the media, the conformity factor, the collective ego, and the fallibility of the human condition that’s got my goat.

I respect and honor those who have died, I’m sorry for families’ loss, I sympathize with the sadness and the pain.. but not in the name of patriotic america. I don’t get all warm and fuzzy when I hear the country’s anthem, in fact, it makes me a bit nauseous when I hear a stadium of people singing it in unison. It’s scary.

I empathize in the name of humanity and love. I respect them not because they “fought for our apparent ‘freedom'”, but because they are beautiful humans that lost their lives in the name of profit and power. I’m not “proud to be an American”. I’m happy to be a human that cares for other humans, no flags needed.

Countries, borders, and nationalities are all conceptualized illusions. We are all indigenous, we are all native, we are all related.. to this planet. We can’t drink oil and we can’t eat gold. There are no “special spots” of “sacred” land, every pebble and every stone is sacred. There is no special “race” of human, we are equal and we are all in this together. There are plenty of resources for everyone, it is greed that causes the imbalance, it is greed that fuels the wars. We are never angry at what we think, in the same way, we are never fighting wars for the reasons the common civilian thinks.

I will not participate in the perpetuation of the war machine by flying a flag or claiming a country. I will not succumb to the antics and propaganda of their hate mechanics. I will not be fooled by mainstream media into profiling my fellow human brothers and sisters. I will not buy the bullshit and I will not sell my soul in the name of patriotism.

Peace to all humans.